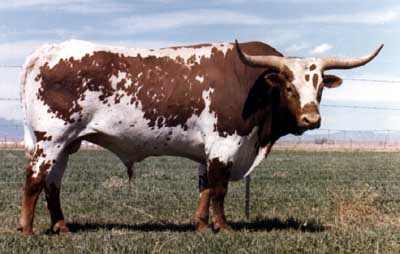 He was sired by Texas Ranger, out of Belle Star 31. This great old flamboyant red & white bull lived to be 20 years old & successfully bred up until the last day of his life. No other bull in the Longhorn breed nor probably any other breed in the United States bred for a 20 year life span & also produced thousands of units of frozen semen. His strong traditional Longhorn genetics & longevity make him a sire that will not go away. His best known son is Gunner. He will have numerous calves born in Brazil. 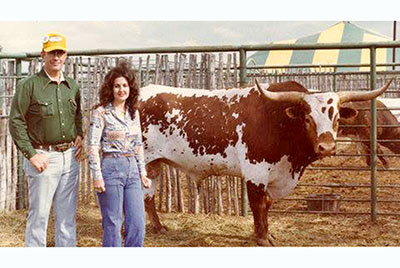 Texas Star - by Texas Ranger was the first TL bull to fetch a bid of $10,500 at public auction. It was 1978. This is me a hundred years ago and the buyer Judy Jenkins. Texas Star was owned and bred by 7 people and his head mounted in the fall of age 22. Last owner Stuart Burns DVM, Paris, KY. He was a fertile breeder past 22 years. Semen still available from DCCI. The previous high selling bull was $3000. He started a lot of good things in motion.