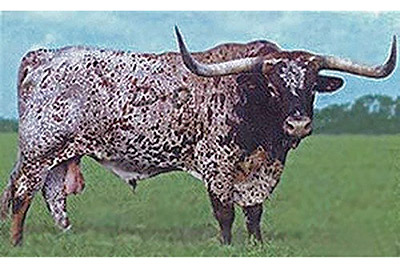 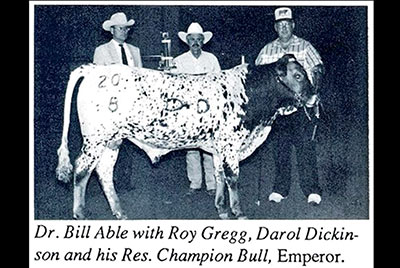 Emperor -- He was born in 1988, a son of Overwhelmer out of Rangers Measles, the over 1400 lb dam of 31 registered calves. Emperor was a natural birth and from the earliest of his days was a clean cut, big stout calf. He was the best weaning weight of the whole DCCI calf crop at 616 lbs at 205 days. That was close to a record 205 for the industry -- maybe it was. Very few people were weighing and still do not weigh, so no one knows.

Johnny Hoffman purchased many of his foundation cattle from DCCI. He acquired his first bull Texas Freckles from DCCI and later Dixie Hunter, Dixie Rebel, and Dixie Ruler. In the mid eighties Johnny would call and ask when was I going to have a new bull for him. I would tell him when the right one came along I would call. From time to time Johnny would buy or borrow a bull and each time I would think I had lost a future sale. I knew how critical Johnny was and I would call him and check. He would tell me he was still waiting on me to raise him a good bull although he used some mostly Butler bulls during the waiting period.

In spring of 1989 I finally called Johnny and told him I had the right bull for him. His name was Emperor and he could have him for $6500. I was breeding him to some heifers at the time. Emperor was one of the early successes of line breeding Texas Ranger JP.

In 1989 there was an Amarillo TL show so I took Emperor and some other cattle to support the show. Emperor was judged Reserve Champion under an older bull, and this photo was in the Texas Longhorn Journal. (That was before I learned how important it was to wear a western hat when showing TL cattle -- forgive me please.)

I took Emperor to the TLBAA World Show June of 1989. I was certain he would win the class because big beef type cattle was the main goal in those days. I was certain no other bull could even get close to his big size and striking thickness. Well-- wrong. Emperor was placed 4th and 3 bulls larger than him in the same class were placed above him. Johnny was heart broken and said he knew what was happening -- he would never show Emperor again. Even at 4th place people came to Johnny and wanted to buy semen on this obviously great young bull, which was not offered to the public for many years later.

Johnny used Emperor on cows of Butler X Texas Ranger blend and it worked very well. Johnny never did AI or embryos, but raised more great cows than any other person in his day. It is easy to find the Delta and Dixie named cattle mostly sired by Emperor. TL history is full of the Hoffman genetics going back to Emperor.

Johnny did not like the Emperor name because he had some real hard feelings about the emperor of Japan. He complained about the name numerous times, but waited too long to do a name change, and it stayed Emperor.

Emperor has 811 registered TLBAA progeny. More than his sire Overwhelmer, Rio Grande, Gun Man, Boomerang, Super Bowl, Phenomenon, etc. His main years were used by Hoffman then he was sold to El Coyote where he was minimally used the rest of his life. Emperor's name can be found in the pedigrees of Top Caliber, ZD Kelly, Horseshoe J Example, Boomerang, Royal Reputation ($150,000), Delta Van Horne, Bayou Empress, EOT Outback Beauty ($150,000). He is one of the 10 leading semen sales sires in TL history.