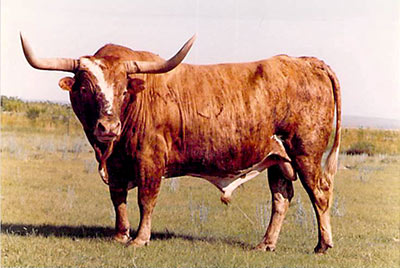 During the 1974 Wichita Refuge sale the biggest calf of the day sold. He was light brindle (most brindles were pale, not bold like today) and he had a little too much under skin. I really wanted to get a source of brindle in the herd and no really good cattle were brindles. I passed on him also due to his crazy ring conduct trying to eat the WR ring men. Bobby Garrett bought him and named him "Snuffy." He soon settled down and became one of the best looking WR bulls. He was out of a daughter of famous WR 1814. After considering his qualities, I bought him from Bobby Garrett.

During his life he was used by DCCI, Wright Materials and Travis Marks. We still have some semen on him. We changed Snuffy's name to "Bell Ringer" for a more positive advertising plan. Bell Ringer sired Widespread who was a stronger brindle. When Widespread was bred to Doherty 174, a daughter of Doherty 698, Miss Widespread was born, bred by Dominion Syndication of San Antonio. Miss Widespread was bred to Circle K Donovan, a son of Senator and Jamoca was born for Tom Smith. Tom bred AI to Shadowizm and Jamoca produced WS Jamakizm who was bred to Shining Victory and there you have Drag Iron. It only took me 40 years to get the bright brindle, over a ton, nearly 84" joy of the DCCI pasture, Drag Iron. Some things take time. Great things take more time.