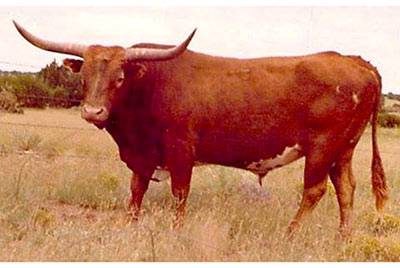 Royal Mounty was not a well known bull and was almost even less known. He was bred by Kenneth Archer of Seiling, Oklahoma. He is registered as sired by Trail Boss an all WR bull that Archers owned. His dam was an all WR cow named Archer #1. That made him an all WR bull, yet he had a wider spread than any WR bull in history. When he was consigned to the National Western MPTLA Sale, even though he had more horn than any bull in the sale, the sale committee sifted him. Although not in the sale John Brittingham purchased Royal Mounty. (Remember John Brittingham also bought Cowcatcher and sold him in the NW sale.)

Royal Mounty was bred to Terry Kelsey's daughter of Texas Ranger, Miss Texas Ranger 262 and a huge bull was born in 1981. This was "King" who was also a solid red bull that was not in good favor as a value color. "King" was sold to Bill Harding of Hardings Nursery in 1982 to breed to Hereford heifers. As "King" developed he got larger horned and larger of body. In 1984 Alan Sparger saw him and couldn't use a red bull. "King" developed into the first TL bull to be over 60" and over a ton.

Finally he was purchased back by DCCI and soon after his son Zhivago was born. Zhivago sired Gizmo, who sired Winchester, who sired Win Win who sired Clear Win who sired Clear Point. "King" also sired the grand dam of Super Bowl. "King" was the great grand sire of Jamakizm. Field of Pearls is a double bred "King." With the increased family fame semen was collected on Royal Mounty, he was blood typed, but did not blood type to Trail Boss, but did blood type to Texas Lin also owned by Archers. Although the blood type findings were not publicized, some times Royal Mounty was presented in sale catalogs as Trail Boss and other times at Texas Lin. "King" was owned by DCCI, Carroll Shores, El Coyote and Micky Wood. Semen is still being used. And one last thought -- "King" is the only bull ever registered with his name in "parenthesis."