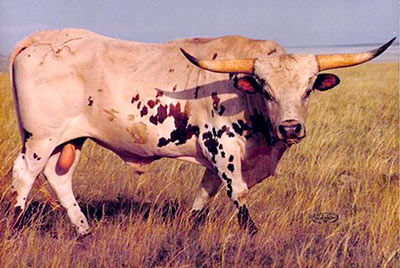 He is sired by Blue Horn, out of the famous corkscrew horned cow, Droop Horn. Superior is all Butler breeding. He is probably the tallest & heaviest bodied of all the Butler bulls. He combined the tight twist horn factor of his dam, with her tremendous milking abilities. His weaning weight was believed to be the best of any Butler bull on record. Superior's best known son is Phenonomeon, (60" horn) who many believed to be one of the top female horn sires in years past. Almost no semen is available from him.

Superior -- born 11-17-1979. Sire: Blue Horns. Dam: Drop Horns. I first saw Superior on exhibit at the Nacogdoches, TX, Texas Longhorn Sale. His dam, Droop Horns was owned by Sammy Meshell. For a small fee some of the locals had their prize cattle on display for sale attenders to drool over. Droop Horn and her huge calf were so impressive people were leaning on the panels looking, and Sammy was talking up a storm about how great they were. He was rightfully proud of this pair. Droop Horn had the most twisted horn of any cow most had ever seen and she had Superior at side nursing, who was probably the largest nursing calf anyone there had ever seen. Obviously Sammy turned down several offers that day as this pair stole the show. I ask him a price on the pair, or either one, and he just gave me a big cajun smile. It was certain this was not a buying day. He was positive Superior was the superior bull in the whole wide world and he wanted to harvest whatever business could be generated.

Every month or so I called Sammy and he would spend a half hour preaching to me that Superior and his dam were the greatest cattle that ever lived. I did not argue with his love affair on these all Butler cattle, but would like to cut to the chase and get them bought. The more he talked about this absolute greatness the more he trained himself to believe his own sales pitch.

It took two years of dedication, listening to Sammy about "greatness" until the early spring of 1982, I bought a half interest in Superior for $25,000. Quickly I got him hauled to Elgin Breeders and Carl Rugg was collecting Superior the following day. Semen was immediately placed on the market. The timing was right. Pure Butler bulls were, at that time, the largest horned cattle in the breed. He was one of the bigger ones. His size was no doubt the largest of any Butler bull. He had the close up cork screw horn factor from his dam.

After collection he was transported to Colorado where he was given the largest herd of cows he had ever seen. He sired a number of cork screw horned daughters. There were 3 foundation bulls who sired some small consistency of cork screw daughters and Superior was the most frequent.

Before Superior got to Colorado his semen was placed in use for embryo transfer. He was quickly flushed to the top cow of that day, Doherty 698 on May 25, 1982, and a red pinto embryo bull calf was born on 3-11-1983 - we liked him - he was named Phenomenon. In the same flush there were 3 daughters and 2 other bulls. Phenomenon grew more horn than any other bull at DCCI. He was a stand-out.

Many Butler cattle were held totally in service with only Butler blood. As a result this "fixed" the genetics to perpetuate the exact same type. Superior on Doherty 698 offered a blend of 25% Wright, 25% WR and 50% Butler. As a result Phenomenon became more popular than any all Butler bull. His genetic strength still commands semen sales of $500 per straw 32 years after his birth. His longevity of breed usefulness has seldom been equaled by any bull in any breed.

The top all Butler sire Unlimited is out of Superiors Droopy by Superior. That line of genetics has multiplied to an even wider success.