Only 35 Watusi grace DCC among over a thousand registered Longhorns and BueLingo.

In 1979 the Dickinson family owned 1/4th of the Full Blood Watusi in the USA. (see our first ad) Due to the extremely high prices that they fetched in the early 80's, ($20K-$25K) every Watusi was sold.

As years went by, we still are fascinated by the world's largest horned breed of cattle. In 1996 we started raising a small group. Each year some Longhorn/Watusi cattle will be available and now several purebred are for sale. 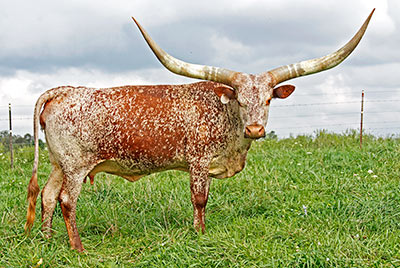 Mara Karaka is a daughter of Buffalo Bill. She is the flashy speckled style Watusi that commands the best sell prices. Her wide lateral horn and great African color create extra value.

Semen is available on the famous "Jimmy The Sweede" ($12) who was imported from Sweden. He was bred natural service at DCC and was the first Watusi with frozen semen in the World. He is the leading sire appearing in more Watusi pedigrees than any other bull.

At this time, we plan to develop a herd of Longhorn percentage Watusi steers. We believe with careful selective mating 8' and 10' steers can be produced that will be awesome exhibition or riding stock.

Each year some young Watusi bulls are for sale. Bulls may be purchased with a 50% deposit with delivery at weaning time. DCC specializes in spotted, colorful Watusi with wide lateral horn. The Texas Longhorn blood in 15/16, 7/8, and 3/4 Watusi add stamina, soundness and brilliant color. DCC is a lifetime member of the World Watusi Association. 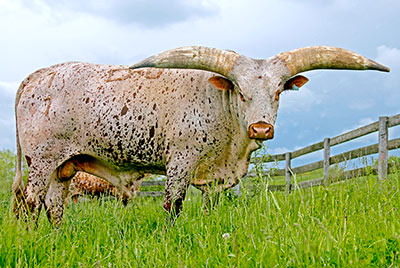 Pretoria is a son of Famous bulbous horned "Woody." He has served as senior sire at DCC for 4 years. He is the progressive type Watusi with wild speckled color and lateral horn. Semen $25. 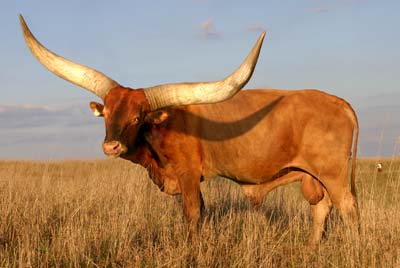 Buffalo Bill was used as senior sire at DCC for 4 years. Many of the Pretoria daughters are from Bill daughters. He is the leading sire of huge horn of any AI semen sire in the USA. He is used in Africa, New Zealand, Australia and the USA. Semen $100.

Sweet Immambo - Although DCC has found in 37 years of marketing Watusi that the flat out horn sell higher, the wild African spot patterns like Sweet Immambo by Mr. Immambo really catch the eye. 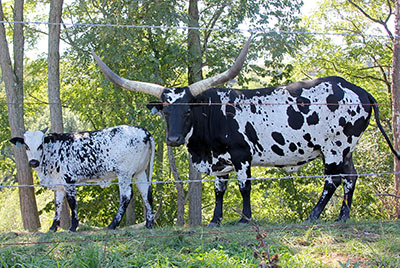 Mr. Immambo was the DCC Herd Sire for 4 years until his death in 2003, he was 100% pure Watusi and his 77" tip-to-tip horns were very impressive. He was very laid back and had a great disposition. Semen is still available on Mr. Immambo for $20. 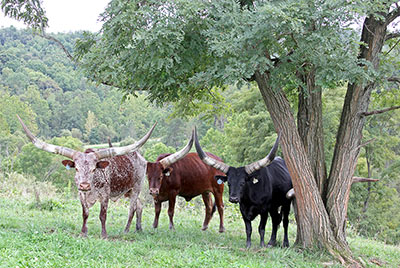 The Watusi herd was first founded in 1979. DCC was the first private Ranch to breed Watusi, collect semen, and perform embryo transfers.

This Watusi cow produced the largest weaning weight of over 350 cows in 1997. Her extra horn twist makes her a stand-out in the Watusi herd.

Miss All American Pie is the dam of Akeem. She is an Excalibur daughter, and one of our favorite cows.